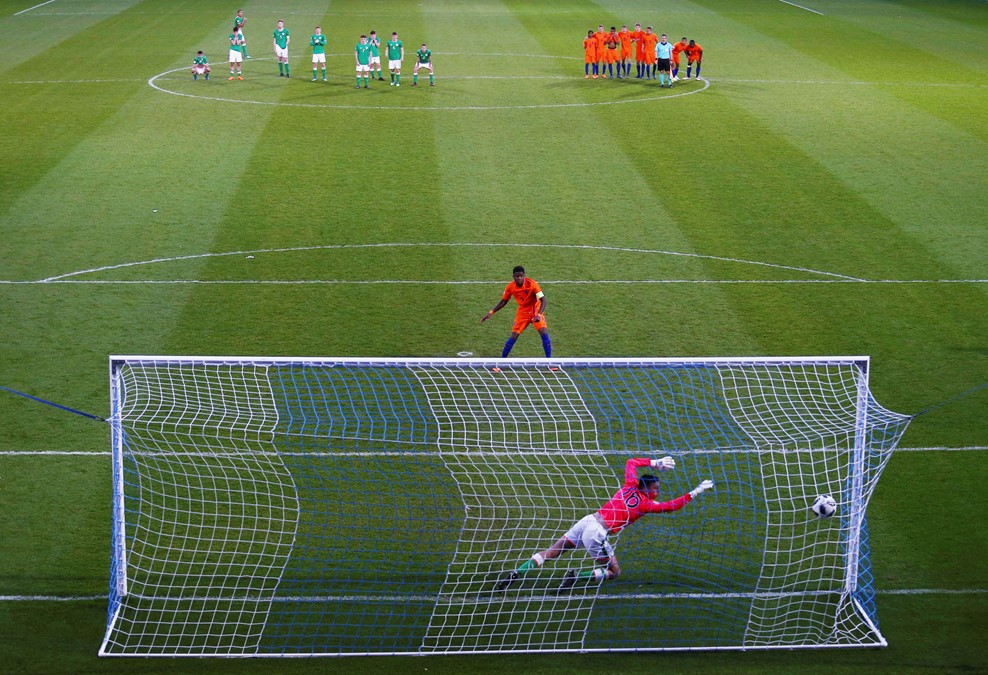 Republic of Ireland Under-17 manager Colin O’Brien refused to focus on the controversial way his side exited the European Championships and instead looked to take the positives out of the tournament.

Ireland drew 1-1 with the much fancied Netherlands and lost 5-4 in a penalty shoot-out, but that only tells half the story.

Republic of Ireland goalkeeper Jimmy Corcoran saved the fifth penalty from the Dutch, seemingly keeping Ireland in the game, before referee Zbynek Proske ruled that Corcoran moved early and not only ordered the penalty retaken but showed the goalkeeper a second yellow card for the infraction.

Ireland centre-back Oisin McEntee had to go in goal for the retake and this time Daishawn Redan made no mistake, firing his penalty home and sending the Dutch through to the semi-final where they will face England.

O’Brien claimed that the Dutch goalkeeper Joey Koorevaar had been twice warned about moving early, but had not been sanctioned.

Speaking to RTÉ Sport about Corcoran’s dismissal, O’Brien said “I think he said something that he might have come off his line earlier and he warned the Dutch goalkeeper in two of the penalties as well.”

However the Ireland manager was eager to focus on how well his side have done throughout the tournament and added: “Look, these boys have done their country proud tonight. They’ve great character, they’ve been like that all year and they’re a super bunch of lads.

“Probably our quality on the ball tonight might have been a little bit better, but we limited this talented Dutch team in goal-scoring opportunities.

“We got a great goal after going one down, it went to penalties and we were very unfortunate with what happened here tonight.”

“They’ll be devastated but they’ve been fantastic year and they’ve all got big careers ahead of them.

“They’ve had a great season with us, going through two qualifying rounds with us unbeaten, topped their group and as I’ve said they’ve run a real talented Dutch side right to the limit tonight.

“It’s a tough way to go out but we’ll take a lot out of it and they’ve all got big careers ahead of them in the game.”

Stoke’s Nathan Collins added: “It’s heartbreaking. Raging for the lads. I didn’t know what to do, what to think. When he saved it, I was buzzing, but it’s the referee’s decision. It’s his decision, nothing we can do about it.”

Ireland were off the pace in the first half and were forced to defend deep for much of the opening 40 minutes, but improved drastically in the second half and O’Brien was happy to see his side compete as such a high level.

“[The Netherlands] had a remarkable record themselves so their temperament was tested as well.

“We had really good quality for the goal, probably needed a bit more quality during the game on the ball, but look, they’ve been super. What a tournament, what a experience for them and as I said, they did the country really proud.”