For me and every Irish person in and around my age, my favourite World Cup has to be Italia ’90. It was the first World Cup for the Republic of Ireland and the excitement and euphoria in the country at the time was all-encompassing, even for people with no interest in football. To quote the legendary late, great, never-to-be-forgotten sports journalist Con Houlihan: “I missed the 1990 World Cup, I was in Italy!”

The last World Cup of my innocence, that is the 2002 World Cup, comes very close to being on a par with 1990 as my favourite World Cup. However, the build-up to that 2002 World Cup heralded utter desolation for me and everyone with an interest in Irish football. The infamous “Saipan incident”: the bust-up which led to Irish captain Roy Keane being sent home (or did he walk out?) some two weeks before the start of the tournament left a blemish on the tournament for Irish hearts.

This writer personally couldn’t fathom the whole “Saipan incident”. While there were undoubtedly inadequacies within the Irish setup, the squad was there mainly to rest and acclimatise following a hard season, and, despite the inadequacies, what greater honour can any athlete receive than to be asked to represent his country? And on arguably world sports’ single greatest stage: the FIFA World Cup.

But this article is not about the Saipan incident; that has been talked about far too much elsewhere. This article is about what for me – and Irish people of my age – is arguably the best World Cup; that is a World Cup that I can fully remember (due to my extreme youth, 1990 is a hazy memory), the last World Cup of my innocence, the fact that my country was there in 2002 (for only the third time ever and still, 16 years on, the last time that the Republic of Ireland has been there), the spirited (and often extremely skilful) displays of the Irish squad and the reaction and commitment of the Irish fans to travel some 15,000 miles to Japan and South Korea to follow the team.

The Republic of Ireland’s qualification campaign for the 2002 World Cup was fantastic. Inspired by Roy Keane, Ireland would go unbeaten home and away against such heavyweights as the Netherlands (1998 World Cup fourth placers) and Portugal (UEFA Euro 2000 semi-finalists with FIFA World Player of the Year Luis Figo in their ranks). Ireland would famously beat the Dutch 1-0 at Lansdowne Road in that qualification campaign with Republic of Ireland manager Mick McCarthy saying immediately after the game: “You can keep your Zidanes, Rauls, Figos and Ronaldos; I’d pick Roy Keane ahead of any of them.” And nobody present thought that statement was hyperbole.

Onto the 2002 World Cup finals. Ireland was drawn in a tough group against Saudi Arabia, African champions Cameroon and three-time world champion superpower Germany. First up was Cameroon. Ireland struggled in the heat and was 1-0 behind at half-time. In the dressing room at half-time, Ireland manager Mick McCarthy issued a passionate rallying cry to his troops: “Don’t have any regrets. For all of you except Stan and Quinny (Steve Staunton and Niall Quinn), this is your first World Cup, but it could also very well be your last World Cup. Leave nothing out there lads.” Those words were to prove prescient, as despite the fact that many players in that 2002 Irish squad were extremely talented, none of them would play at another World Cup after 2002.

In the second half of the Cameroon game, Ireland performed much better and bagged a splendid equalizer from Matt Holland. Late in the game, Robbie Keane had a chance to win the game for Ireland but he was desperately unlucky to see his effort rebound back off the post and 1-1 was to be the result. 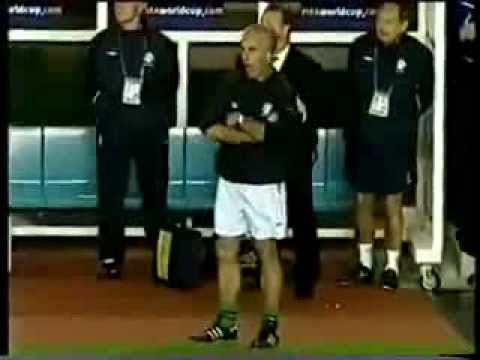 Onto the night of the 5th of June and the crucial second match against the Germans. Germany had obliterated Saudi Arabia 8-0 in their opening game and Ireland knew that to stand a chance of progressing to the next round, avoiding defeat against Germany was a must. Die Mannschaft knew that a win over Ireland would see them progress from the group stages as Group E winners, thereby seeing them to a more preferable route through to the latter stages of the tournament. Germany took the lead through the prolific Polish born Miroslav Klose (a man who would go on to be the all-time leading scorer at the World Cup) after 19 minutes. From then on, the Germans seemed happy to shut up shop, take a 1-0 win and progress to the next round. Ireland dominated from then on and, aside from a few German chances on the counterattack, Ireland dictated the proceedings, with German goalkeeper Oliver Kahn making save after save after save. German footballing legend Franz Beckenbauer said after the game: “If you had thrown every German player into a bag and kicked the bag, every one of them except Oliver Kahn would have deserved to have been kicked!”

As the minutes ticked by, the Germans continued to repel attack after attack and as the match ticked past the 90th minute, it looked like all hope for the Irish was lost and that a first round exit from the World Cup was their fate. Considering what a splendid, gutsy campaign it had been for Ireland that would have been a terrible fate and would have been made all the worse by the many cynics who would have said: “Ireland couldn’t do anything without Roy.”

More than two minutes into injury-time at the death of the game and with the Irish fans still fervently willing the Irish players on, Steve Finnan pumped one last, long ball forward. Niall Quinn flicked it on, Robbie Keane got in past Ramelow, the last German defender and with the imposing 6’2”, 15 stone frame of Oliver Kahn converging on him, Robbie proceeded to place the ball into the back of the net, via the post.

Cue Robbie’s famous cartwheel celebration, utter bedlam in the stands and the entire Irish team and bench converging on the Dubliner in celebration at the salvation of the World Cup campaign. 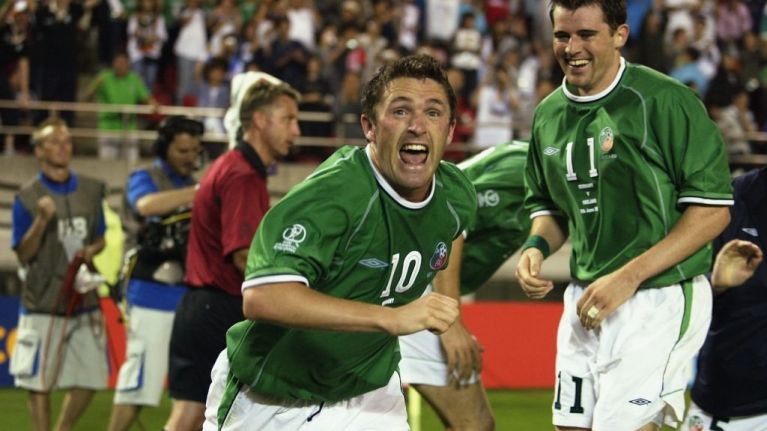 Speaking minutes later in the media scrum immediately after the game, Robbie proclaimed: “Forget women, golf, even hurling, THIS is the best moment of my life!” while the banner headline on the front of Irish newspapers the following day was: “ONLY ONE KEANO IN IRELAND AND IT’S ROBBIE!”

Ireland would comfortably beat Saudi Arabia 3-0 in the final group game, with Robbie Keane scoring the all-important nerve settling opener early in the first half, followed by second half strikes from Gary Breen and Damien Duff to seal progression to the next round. 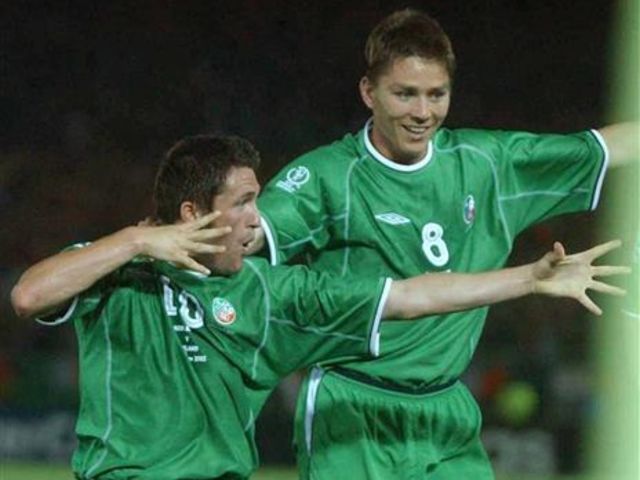 Ireland faced a strong La Liga laden Spanish side in the second round, who took the lead after eight minutes through Fernando Morientes. The Spanish proceeded to dominate and had two goals disallowed shortly afterwards. It looked like it was going to be a long night for Ireland but tactical and personnel changes saw Ireland get back into the game, with Damien Duff giving one of his best performances as a professional footballer. Ireland had a gilt edged chance to equalize midway through the second half with Duff winning a penalty, However Ian Harte saw his effort saved by Iker Cassilas.

With the clock having ticked past the 90th minute, hope was once again fading for Ireland but the players weren’t giving up and were undoubtedly spurred on by the passionate Irish fans. With the final whistle seconds away, another long ball was launched forward and another penalty was awarded, this time for substitute Niall Quinn nearly having his shirt ripped off by Spanish defender Fernando Hierro. Robbie Keane stepped up to take the penalty and slotted it home with aplomb. Cue another cartwheel and exuberant celebrations from the Irish.

30 minutes of extra-time would fail to separate the teams and Ireland would sadly exit the 2002 World Cup in a penalty shoot-out. Considering the calibre of opposition that Ireland faced, especially Germany, who would go on to reach the final and only concede a goal at the tournament (aside from Robbie Keane) to Ronaldo, this for me was (including the qualification campaign) the Republic of Ireland’s best ever major tournament campaign.

Speaking in March 2017 at his induction into the Football Association of Ireland (FAI)’s Hall of Fame, Robbie Keane was asked by RTÉ’s Soccer Correspondent Tony O’Donoghue what was the highlight of his career. Robbie replied by saying: “For me, the greatest thrill was always pulling on the green shirt and playing for Ireland. To play at the World Cup was something very special. If I was to pick one moment, it has to be the goal against Germany at the 2002 World Cup. That goal made me a global name. That goal changed my life forever.”

Paying tribute to Robbie Keane at that FAI Hall of Fame ceremony, Robbie Keane’s former Ireland national team manager Mick McCarthy said: “If it ever gets better than Germany back in 2002, well, I want to be there pal!”
So do we, so do we.