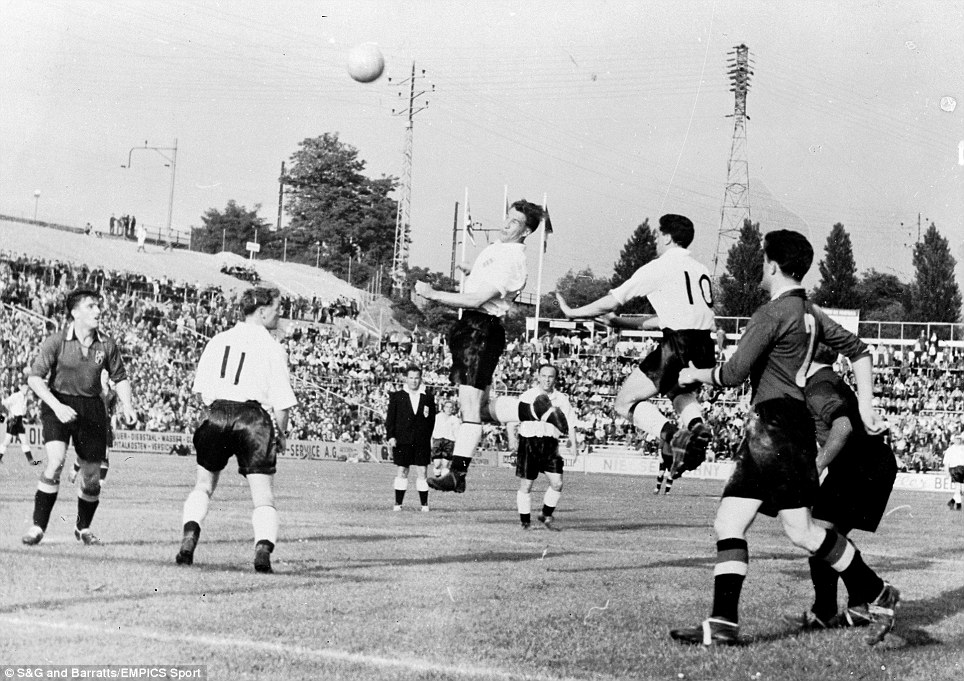 With thanks to Ron Griffith for his thoughts: see http://www.ronsblog.com for more:

World Cup years are very special to me. I vaguely remember the radio reports from Brazil in 1950, the first ever Eurovision live black & white matches from Switzerland in 1954 and the first ever live match England 4 v Belgium 4 and of course The Miracle of Bern when West Germany came from behind to beat the Magic Magyars with Adi Dassler providing the screw-in studs on a very wet day at the Wankdorf Stadium for the victors.

In 1958 we had matches from Sweden and the famous first of many Brazil triumphs, this time over Sweden at Solna Stadium. 1962 from Chile was only available afterwards with film sent by BOAC from Santiago to BBC in London, and then there was England 1966 my first live World Cup… nine matches at Wembley, Hillsborough, Old Trafford and Ayresome Park, Middlesborough where North Korea beat Italy 1-0 and I celebratetd with saki in the Korean dressing room afterwards, while my mates waited in a car outside.

In 2018 I only went to one live match, Round of 16 at Spartak Stadium Moscow and THAT was my pick of the over 100 matches that I attended last year. Three glorious sunny days in Moscow, my first visit in 54 years. Forget the politics for a minute if you can.  I have been to 88 countries, some with governments I did not agree with. My first visits to Argentina, World Cup 1978 and Brazil 1980 were during dictatorships. Egypt, Thailand, Azerbaijan, Guatemala, El Salvador and more have been ‘interesting’.

Moscow was a fantastic fan experience and a creative way of getting there via  Air Moldova from Stansted with a quick change in Chisineau and three nights at cheap but clean as a whistle  Qube Capsule Hotel, 2 stops from Red Square.

My best memory of the Round of 16 between England and Colombia at sold out Spartak Stadium. After 1-1 regular time where Harry Kane had taken the lead from the penalty spot in the 57th minute and then Yerra Mina had equalised in the 93rd minute. No goals in extra time and so to the dreaded penalty kicks. Jordan Henderson missed but Jason Pickford was AWESOME with a miraculous save and then Eric Dier won it.

All the English fans including the players families in my section went crazy. The guy in the next seat asked me why I had been so calm.” It was my 100th World Cup match live” I replied.”I have seen it all”. I also wasn’t feeling very well, until that moment.

I flew cheap on Air Belavia to Minsk, Belarus for thrre days where I watched France v Urugaay, thne a 12 Euro bus ride to Vilnius, Lithuania celebrating the nations centenary in Cathedral Square and across the road watching Egland beat Sweden 2-0 and then a 22 Euro flight from Vilnius to Leeds. Not finished I flew to Pula, Croatia for a couple of nights wearing my red and white chequered Croatia jersey given to me personally by legend of the 1998 campaign in France and now the Federation President Davor Suker at his officein Zagreb a year previously. The match was shown in the historic Roman Arena, but after 2 hours in the baking sun I left for an air conditioned local bar in the old town and some very cold drinks.

I got bumped, voluntarily, by JET 2 on the return flight to Manchester due to a flight crew illness and shortage, and put on a later flight plus a free Jet 2 round trip flight anywhere in the next 12 months.

My favourite first time visit was Odessa, Ukraine on the Black Sea a few month earlier. After some days in Bucharest, Romania and a short flight to Chisinau for a couple of days and a match, I spent about $10,00 on a bumpy ride to Odessa in a 20 seat Mercedes bus. I had visited Lviv, Simferopol and Yalta in Crimea,  and Kharkiv and Kiev, Odessa was always on my bucket list, and a fabulous destination if you have the opportunity.

Readers can see more of Ron’s insight at http://www.ronsblog.com and contributions to help the site keep going can be made at: Pal.ron@foootysport.net