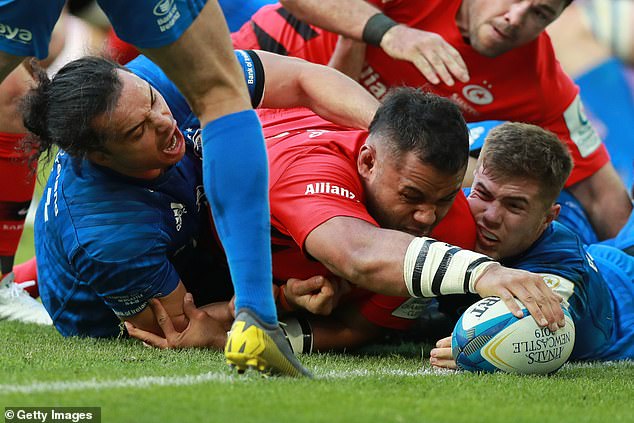 Leinster will have to wait for their fifth European title and based on the way Saracens earned their third crown in Newcastle they have a job on their hands to close the gap next year.

Leinster played their part in a titanic tussle and will rue their inability to make their 10-point first-half lead pay, but they were over-whelmed by Mark McCall’s men whose relentless physicality kept the holders scoreless for 52 minutes.

Leo Cullen’s men will rue their inability to take their lead into half-time and they couldn’t make a spell of dominance early in the second-half pay. There will be frustration at a number of referee Jerome Garces’ decisions, but the better team won the day.

Saracens matched Leinster’s team of 2009-12 by winning three titles in four years and given their age profile it seems like they’re only getting started.

Leinster did well to stay with them for so long, but eventually the brute force took its toll.

It had all started so well. Much of the focus pre-game centred on Garces and the French official punished the aggressive Saracens defensive line after two minutes, giving Johnny Sexton the chance to give his side the lead and the Ireland out-half made no mistake.

Leinster seemed determined to set the tone physically and a six-man counter-ruck on the edge of the Sarries’ ’22, but James Ryan was punished for holding on in the aftermath and when Owen Farrell kicked for position the English side immediately looked dangerous with Rob Kearney doing well to force Liam Williams into a knock-on 5m out from the line.

An uncharacteristic Garry Ringrose knock-on gave the men in red another opportunity to attack but Luke McGrath brilliantly forced Alex Goode into dropping the ball and when Jordan Larmour looked to capitalise he couldn’t pick up his own kick.

Saracens were starting to motor and they pinned Leinster back in their own ’22 brilliantly but again couldn’t make it pay as Maro Itoje knocked on in the lineout.

Another chance came and went as captain Brad Barritt gave away a silly penalty for a shoulder charge on Sexton just after Billy Vunipola had carried to the line and the out-half gladly cleared.

Leinster tried to attack and made progress for a couple of phases, but as a long series went on they were forced back towards half-way before Billy Vunipola made a big turnover.

Yet, another knock-on from Ben Spencer let Leinster off the hook again.

This time, they took their chance with Rob Kearney superbly finding space inside Sean Maitland and once he got free he fought his way to the line.

Saracens immediately tried to kill the ball and, with advantage, Sexton moved it wide to Lowe before the forwards took over and pounded the line from close range. Healy went closest, but couldn’t ground the ball.

Instead, Maro Itoje was sent to the sin-bin for conceding two penalties on his own line and to make matters worse Saracens were forced to replace both of their starting props.

Sexton called for a scrum under the posts and after a reset the eight men forced the seven into a penalty. Conan surged towards the line and eventually the red wall crumbled as Tadhg Furlong powered through Vincent Koch’s tackle to score.

The out-half made it 10-0 and when Saracens worked their way into another strong position Seán O’Brien got in over the ball and won a crucial penalty.

Leinster couldn’t make it count and when Alex Lozowski buried Conan with a tackle, George Kruis followed up on Sexton and the 33-year-old held on on the deck to allow Owen Farrell get his side on the board as Itoje returned.

And the game swung Saracens’ direction on half-time as Luke McGrath opted not to put the ball out for half-time and instead put up a box-kick. Rob Kearney came down on the wrong side and was penalised for not rolling away and Farrell kicked his side into position.

From the lineout, their forwards hammered the Leinster line and eventually the out-half called for the ball and brilliantly found Sean Maitland in space out wide.

The Scot sailed in for the try and Farrell levelled with the conversion as the teams headed for the changing rooms.

Saracens came back out and immediately gave away two penalties to give Leinster a chance to re-establish their lead but Furlong spilled the ball in contact and Ben Spencer cleared.

The English side survived another wave of Leinster attack until Williams won a brilliant turnover under his own post after Healy had run over George Kruis.

Leinster then coughed up their own lineout but the superb Healy won a critical turnover, but James Tracy’s first throw was a wobbly one and Saracens got the scrum.

The tension mounted as the clock ticked towards the hour-mark and Richard Barrington thought he’s scored at the base of the post only, but the television match official didn’t agree.

Garces was playing advantage and sent Scott Fardy to the sin-bin as Farrell nudged his side in front with the penalty.

He then kept his cards in his pocket when Maitland clothes-lined Kearney in the air and another Leinster attack came to nothing as Billy Vunipola picked off Sexton’s pass.

Instead, it was Saracens who looked to strike a winning blow and the 14 Leinster men were forced to once again defend wave after wave in their own ’22 until Vincent Koch was tackled into a ruck and Garces gave a scrum.

The first set-piece marched forwards and earned a penalty so Barritt called for another and while the pack held their ground, Billy Vunipola picked from the base and powered over three defenders to score.

Fardy returned with his team in dire straits and while they never stopped playing they couldn’t get out of their half and then effort took its toll as Rob Kearney and Johnny Sexton needed treatment at the death as Saracens got their party started.