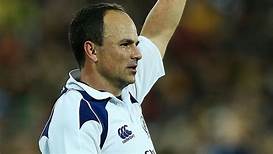 The South African was due to take charge of the hugely anticipated match-up, but has been stood down from the game due to an issue with a delayed flight.

Peyper won’t be in London until Friday morning and because of “referee welfare”– will not be permitted to take charge of the game on Saturday afternoon.

Welsh referee Nigel Owens has been drafted in as his replacement.