A first-half own goal by Yerry Mina and a late Lys Mousset effort gave Sheffield United a smash-and-grab shock 0-2 win at Everton in an entertaining match on Saturday.

United only had one shot on target all match so a 0-2 win was certainly lucky for Chris Wilder’s charges, though they put in a terrific defensive display.

The Blades started with three Republic of Ireland internationals in their starting XI (David McGoldrick was injured).

The result lifted the club from the Steel City to eighth place in the Premier League on eight points from six games while Everton slipped to 14th on seven points after they failed to convert many chances at Goodison Park.

Chris Wilder was delighted with the outcome although he acknowledged it flattered his team.

“That’s possibly the worst we’ve played all season,” he told the BBC. “We didn’t play anything like our best today but managed to win the game.

“We won’t be jumping from the ceiling tonight – I might be, but my players won’t be. It’s great for our supporters, who traveled in numbers again today and were unbelievable in their support of the players.”

Five goals in the first 18 minutes set Manchester City on their way as they ripped apart a woeful Watford to temporarily cut Liverpool’s lead at the top of the Premier League to two points.

City had already bounced back from last weekend’s humbling by Norwich with a clinical Champions League win at Shakhtar Donetsk on Wednesday, but this was a timely reminder of their ruthlessness and attacking power.

Bernardo Silva scored a hat-trick as Pep Guardiola’s side ran riot to clinch their biggest league win since he took charge in 2016. They also hit the woodwork twice and continued to chase further goals until the end, but a record victory eluded them.

Manchester United’s 9-0 win over Ipswich in 1995 remains the biggest victory in the Premier League era but City become only the seventh team to win a top-flight game by an eight-goal margin in the modern era. 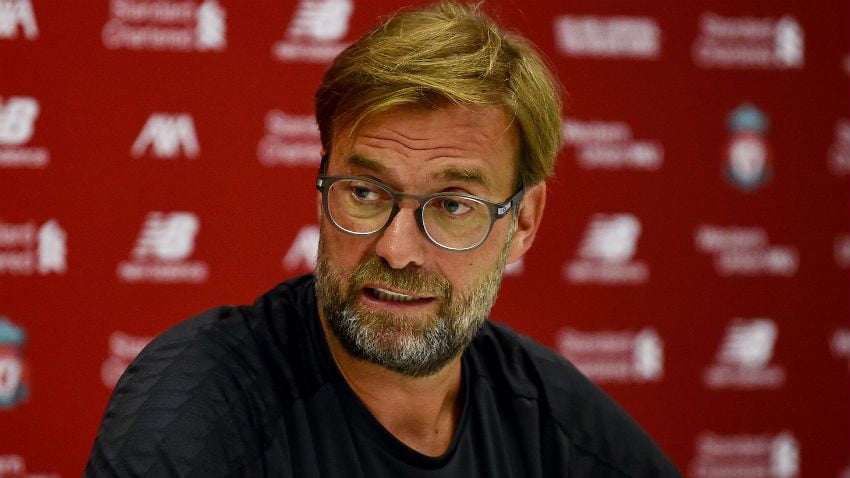 Liverpool boss Jurgen Klopp says his side do not have to compete with Manchester City’s style as the two clubs battle at the top of the Premier League.

The Reds were not at their attacking best at Chelsea on Sunday but earned a 2-1 win to maintain their five-point lead over City at the top.

Pep Guardiola’s side, meanwhile, swept aside Watford 8-0 on Saturday.

“This type of football not a lot of teams can play,” said Klopp.

“But we play in our way, we try to win football games.

“In the end we need to get the points, there is no competition in technical things, it is about the points.”

West Ham United eased to victory over a poor Manchester United with a comfortable 2-0 win at the London Stadium.

Andriy Yarmolenko turned and finished into the bottom corner with two minutes to go before half time to score the opening goal of the game in a poor first half. Aaron Cresswell then secured the points with a stunning free kick with six minutes to go that beat David de Gea.

“Everyone wants to play their style,” said Burnley manager Seán Dyche after his side has physically imposed themselves on their opponents yet again in beat Norwich City 2-0 at Turf Moor. “We do what we do. We want to play on the front foot, we want to take games on. It’s very difficult. I thought the collective group played very well today.”

They did. When the opener came on 10 minutes, the naive visitors had already given the ball away twice in dangerous positions in the midst of a ferocious high press. An inswinging Ashley Westwood corner was met at the near post by an unmarked Wood. As simple as that, Dyche’s well-drilled charges were ahead. If it ain’t broke, don’t fix it.

A thoroughly miserable afternoon for the Canaries got worse quickly. First, captain Alexander Tettey came off with an injury and on 14 minutes it was 2-0. This time the energetic Dwight McNeil surged down the left before crossing for Wood to turn in from an almost identical spot.

It was a smart finish but the simplicity will have had Norwich boss Daniel Farke wondering what had happened to the players that performed so well in beating Manchester City seven days earlier.

More chances came and went for a fired-up home side in a what was a well deserved three points for the Lancashire outfit with Republic of Ireland international Jeff Hendrick playing the full 90 minutes.

Tottenham Hotspur meanwhile are still awaiting their first away win of the Premier League season.

Leicester City got what they deserved at the King Power Stadium, coming from behind to beat the north London outfit.

James Maddison secured the result his performance merited with his spectacular 86th minute strike. And Brendan Rodgers’ team were dynamic, disciplined and daring as they eventually overcame Spurs. Had Tottenham won this game, as comfortably as it looked as though had in the 64th minute, it really wouldn’t have been a true reflection of the balance of play.

And yet, Tottenham should have won this game. And were it not for VAR they would have almost certainly have done so.

Tanguy Ndembele had played in Son racing through on goal. The assistant ref let play continue and the cross was blocked. Harry Kane picked it up, played in Serge Aurier who struck, seemingly to make it 2-0.

Spurs celebrated but their celebrations were short lived as the goal was chalked off because Son was supposedly a few centimetres offside in the build-up according to VAR. For such tight offside decisions, the attacking team deserves the benefit of the doubt.

In the 29th minute, Spurs had taken the lead through a fantastic goal though. Lamela initially burst from midfield, fed Son, who sprinted goal-wards. It looked as though he was lost amidst a forest of defenders but a back heel changed the direction of play and confused them all.

Kane just managed to reach it, Caglar Soyuncu barged into him and the England captain couldn’t stay on his feet. His balance gone he stumbled. He was near enough horizontal, about to hit the floor when he realized he might just still connect with the bobbling ball. He twisted as he fell, swung out his leg and somehow hooked it past Kasper Schmeichel. It was superb technique.

That was as good as it got on the day for last season’s Champions League runners-up though. Leicester would match Spurs’ diamond formation and scored twice to win, while also enjoying a very sizable chunk of luck in the process.

On Friday night, Nathan Ake, Harry Wilson (pictured above) and Callum Wilson’s goals gave Bournemouth a 3-1 victory at Southampton – their first ever away win against their local rivals.

A dominant first-half display saw the Cherries go into the break 2-0 up, while Josh King also saw a goal disallowed by VAR for offside.

James Ward-Prowse’s penalty gave Saints a lifeline shortly after half-time after Steve Cook brought down Che Adams, but they could not find an equaliser.

Callum Wilson’s goal with virtually the last kick of the game means Bournemouth move up to (briefly) to third place in the Premier League table ahead of the weekend’s games, while Southampton slip to 11th. 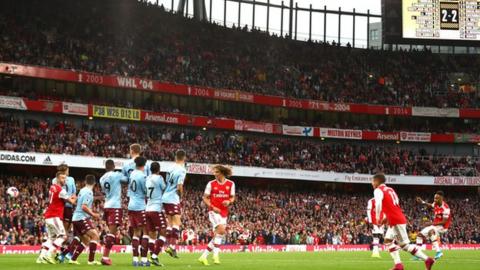 Unai Emery praised Arsenal‘s “amazing” team spirit but admits his side have to improve defensively after twice coming from behind to beat Aston Villa 3-2 in a pulsating encounter at Emirates Stadium.

Pierre-Emerick Aubameyang’s stunning free-kick (pictured above) with six minutes remaining completed an unlikely turnaround for the Gunners, who had Ainsley Maitland-Niles sent off in the first half and were still trailing going into the final 10 minutes.

John McGinn flicked home Anwar El Ghazi’s cross to put Villa ahead in the first half before Maitland-Niles was shown a second yellow card for a rash challenge on Neil Taylor four minutes before the break.

Arsenal levelled early in the second period thanks to Nicolas Pepe’s first goal for the club from the penalty spot only for Wesley to restore Villa’s lead from Jack Grealish’s low cross less than two minutes later.

But in a thrilling conclusion, substitute Calum Chambers’ close-range finish brought the Gunners level on 81 minutes before Aubameyang’s late strike secured their third Premier League win of the season to lift Emery’s side back into the top four. 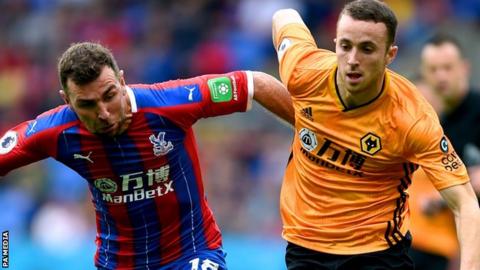 Wolves appeared set for a fourth consecutive defeat across all competitions until Diogo Jota’s stoppage-time goal rescued a point in a 1-1 draw against Crystal Palace. 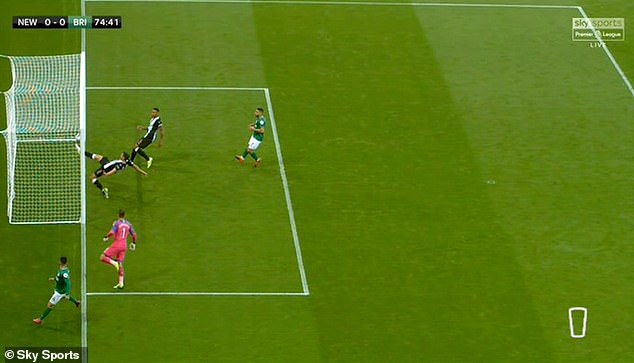 In the other Premier League match of the weekend, Steve Bruce remains winless at St. James’ Park as Newcastle United earned a 0-0 draw with Brighton & Hove Albion following Fabian Schar’s incredible goal-line clearance (pictured above) in the second half.