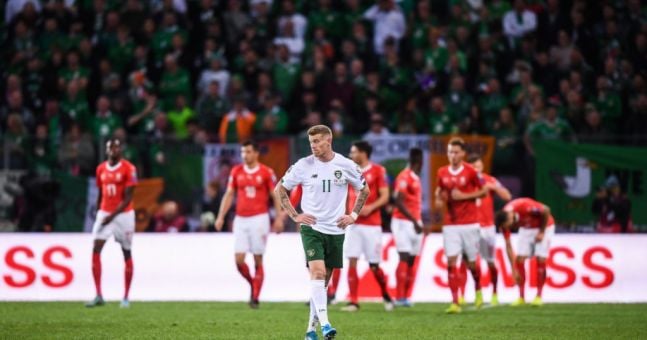 The Republic of Ireland’s Euro 2020 qualification campaign will go down to the wire following the loss 2-0 loss to Switzerland in Geneva.

Switzerland capitalized on a good start in the 16th minute as Haris Seferovic swept home, giving the Ireland – who would have qualified with a victory – a mountain to climb.

Despite an improved second-half showing, Mick McCarthy’s side were dealt another blow as Coleman was sent off in the 75th minute for a second yellow card after he was deemed to have handled a Breel Embolo shot inside the area.

Ricardo Rodriguez stepped up, but saw his penalty well saved by Darren Randolph, who did really well to get down low to get the ball onto the post and the resulting rebound was scrambled clear.

Things went from bad to worse in the final minute as Shane Duffy inadvertently turned home an Edimilson Fernandes shot with the last play of the game.

Ireland will now need to beat second-placed Denmark at the Aviva Stadium on November 18th to qualify but will be without Coleman through suspension. Switzerland, third in Group D with 11 points, have a game in hand and are now in pole position to top the group.