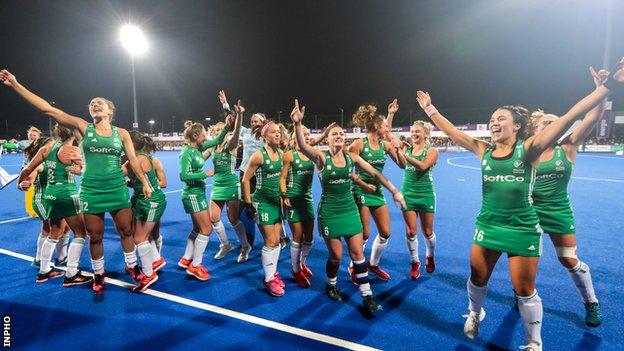 Ireland’s women have qualified for the Olympics for the first time, courtesy of a highly dramatic penalty shootout win over Canada at Donnybrook.

After the second leg finished in a 0-0 draw as the first leg had done, Irish hopes hung in the balance having missed two of their first three penalties.

Ayeisha McFerrin then made two saves to force the shootout into sudden death.

On another cold and wet night in Donnybrook, the game itself followed a similar pattern to the first leg.

Although Ireland began with more purpose they were unable to take control of proceedings as both sides struggled to find rhythm to their game.

Anna O’Flanagan saw her first-quarter effort slide narrowly wide of the post before Brienne Stairs nearly deflected the ball beyond McFerrin, but again the ball drifted past the goal.

With the deadlock unbroken after four quarters, it was Canada who took the ascendancy in the shootout.

Stephanie Norlander, Woodcroft and Sara McManus converted for the visitors while Nicci Daly was the only one of Ireland’s first three penalty takers to find the back of the net.

With Canada needing to score only one of their two remaining penalties to qualify, and Ireland needing to score both of theirs in order to force sudden death, all the momentum was with the visitors.

However McFerrin, so often the hero during Ireland’s run to the 2018 World Cup final, made two saves from Stairs and Shanlee Johnston while Bethany Barr and Chloe Watkins held their nerve to score.

Upton, who had missed her first penalty, stepped up for Ireland’s first sudden-death penalty and scored, surviving a video referral which revealed that the eight-second shot-clock had not been set before the penalty was taken.

Then Woodcroft failed to get her shot off before the eight seconds were up, sending Ireland through to Tokyo 2020.