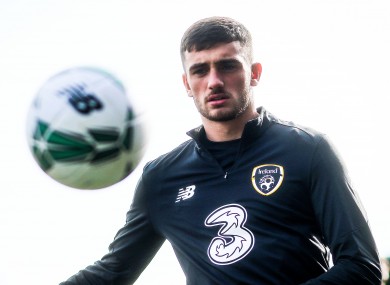 Mick McCarthy will send a much-changed Republic of Ireland side into friendly fare against unfamiliar foe New Zealand (it’s the first time Ireland have played the Kiwis) tomorrow night with one eye on Monday’s UEFA Euro 2020 qualifying showdown with Denmark.

McCarthy has taken what is for him the unusual step of naming his starting XI some 24 hours before the match. The fact that this lineup is quite exciting and therefore might attract more people to attend, might be part of the reason.

Seventeen-year-old Troy Parrott will start at the Aviva Stadium tomorrow.

Celtic’s Lee O’Connor will also be pitched in for his senior international debut, while Shamrock Rovers playmaker Jack Byrne will get to build on his September cameo against Bulgaria by figuring in the starting XI.

There will be particular attention on Parrott, who will be the youngest player to make his debut since Robbie Keane was thrown in against Czech Republic by Mick McCarthy in 1998.

McCarthy says it’s too early to make bold statements about Parrott, while stressing that he had impressed in training with one turn and shot on the Abbotstown pitch on Tuesday, which gave an indication that he was “something special.”

The Irish manager said: “It doesn’t take a special kind to be pitched in. It takes a special kind to thrive, to do well, to make a good impression and impress everybody. I hope that’s going to be the case with Troy.

“He’s a bright, intelligent footballer who is good with the ball at his feet. I think he’s found it tough enough, the sessions. He was understandably breathing hard after he trained with us. He hasn’t played in a few weeks (since scoring four v Red Star Belgrade on October 22 in the UEFA Youth League).”

Speaking of full debutant Jack Byrne, McCarthy said: “It’s not Denmark by any stretch of the imagination but New Zealand are treating it as a big international game and for Jack it will be, to showcase what he’s got. He’s done so much better in the last 12 months, in terms of his all round game. Maybe I’ve influenced it and TC (Terry Connor) has.”