After a delay of some 30 minutes or thereabouts, Mick McCarthy finally emerged for his post match press conference on what was a bitterly disappointing night for him and his Irish players.

He looked weary and was wearing a suit but, untypically for him, the top button of his shirt was open and he was wearing no tie.

“I’m very proud of the players. Despite having played well and made a mistake, we got back into it.

“I gave out to Matt Doherty for his mistake for their goal, I forgot to congratulate him for his goal!

TURNING POINT:
“The turning point was the conceding of their goal. Three games now, having conceded first, we’ve gotten back into it and you’ve seen the mayhem that causes for the opposition when we throw everything we have at them.

“I’ve not been disappointed with any performance in this campaign.

“We’ve played them seven times, the 1-5 game has no bearing on tonight’s game.

“We’ve had one bad performance and come back well.” 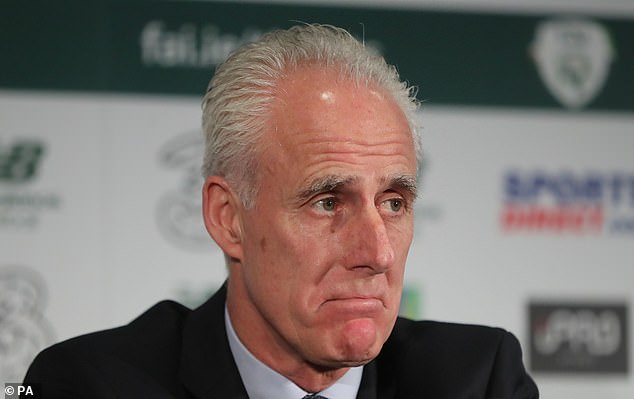 ANNOYED
McCarthy was asked about the Danish goal which came shortly after an Irish attacking substitution.

For the only time in the press conference, McCarthy got annoyed: “The substitution had nothing to do with the goal.

“The subs who came on, I thought also all did well. I’d a centre-half (John Egan) injured at half-time and I had to bring on another centre-half. I wanted to keep it tight for as long as I could.

“If we perform like we did tonight (in the future), more chances will come and more goals will hopefully come. We’ve only scored seven goals in eight games, so we clearly haven’t been clinical enough. I feel if we had nicked it tonight we’d have deserved it.”

When asked if playing out from the back was how we wanted his team to play, McCarthy said:

“Are you winding me up? My players played exactly the way I asked them to. We wanted them to play out from the back. My team did far more than Denmark did.

NO BIG CHANGES AT HALF-TIME

When asked what he said to the players at half-time to play better in the second-half, McCarthy: “I thought we played well in the first-half. We didn’t give them chances. We struggled to find the final pass in on goal though.”